My entry for weekly game jam 84

Hey, thanks for your feedback!

My goal was actually to make a game that makes you work a bit harder than average. A couple of problems I noticed were:

1) Maybe should have kept a "press space for more info" prompt permanently on the screen. Other people seem to have missed that in the intro screen as well.

2) Should've made it clear that the goal is to match people as well as possible, not necessarily perfectly. So, for instance if one person has one trait out of many that another one likes, that's a small win right there. Obviously, this aspect was not made clear.

Now I see where the word "Pinder" come from. :))) Because those documents are pinned (on the wall?). Pin and tinder. Nice.

I thought at first all I gotta do is matching the color. I don't press Space to read further, yeah. Lol. But thet I realize I don't get any score and find more instruction. It's getting more fun after that.

Yeah, the extra info thing was super last-minute. I realized, after I built the game, that there's a lot of stuff that might not be intuitive and threw together that menu page :D

Glad you liked it and thanks for playing! 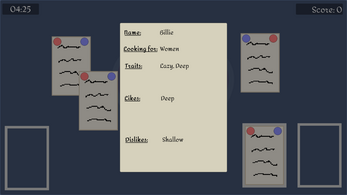